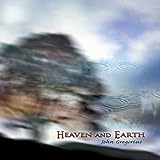 (You can hear an Audio Version of this blog, with music.)

Progressive rock was known for it’s synthesizer and organ orchestrations and furious electric guitar runs, but a lot of musicians were attracted to a more pastoral side of that sound heard in the acoustic guitars of Mike Oldfield in Tubular Bells and Mike Rutherford, Steve Hackett and Anthony Phillips from Genesis. One of those musicians was John Gregorius. He’s a rock refugee who has played in a bunch of Southern California bands, but he went for a different approach on his debut, Heaven and Earth. It’s a sound that mixes ambient textures, world music touches and finger-style guitar.

No matter how elaborate his arrangements might be, the songs on Heaven and Earth begin on acoustic guitar.  Gregorius cites Genesis, but you can also hear the influence of Windham Hill guitarists like Will Ackerman and Michael Hedges in his playing.  He has a few purely solo tracks on the disc, like “Sackcloth to Ashes,” just to show the coordinates of ground zero.  Here’s a video of a solo version of “Heaven and Earth”


If this was just another acoustic solo guitar album, it would’ve been pleasant listening, but Heaven and Earth rises above when Gregorius’s acoustic tunes are set in ambient landscapes. A song like “Mercy” is based on finger-style guitar, but the lead is taken by a country-tinged electric over a Brian Eno-style soundscape that could’ve come off his Apollo album.

John Gregorius is a musician of eclectic tastes, but with a unified vision. You can tell he’s listening to acoustic players, but also has his fingers in rock and ambient music. A track called “Secret to Light” sets plaintive acoustic guitar in an atmosphere of growling, shoegazer rock textures and rolling drums played with mallets that come straight off the launch pad of Pink Floyd’s “Set the Controls for the Heart of the Sun”

Folk, country, blues and world music are incorporated into John Gregorius’ playing. On “Pearls of Great Price,” he creates a meeting of Ambient Americana and Indian music, with udu drum and a guitar lead that sits between languid country blues and Indian raga.

John Gregorius’s new album, Heaven and Earth is out on Spotted Peccary records. It’s our Echoes CD of the Month for December. It will be featured on Monday’s Echoes broadcast. This has been an Echo Location, Soundings for New Music.

(You can hear an Audio Version of this blog, with music.)