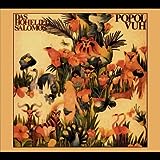 Having just played a track from Popol Vuh’s Das Hohelied Salomos on WXPN’s Highs in the 70s: Progressive Rock show, I was thrilled to discover a new Popol Vuh video up on YouTube.  It’s a track of the “classic” PV line-up with singer Djong Yun, guitarist Daniel Filschesher, oboe player, Robert Eliscu and PV founder and pianist, the late-Florian Fricke.  It’s footage from WDR, West Germany TV of a live take on “Kyrie from the Hosianna Mantra album.  I posted another video up in an earlier blog.

By the way, thanks to all the folks who called in to WXPN Saturday during the show, leaving great requests and fond memories from the days of Diaspar.