You can hear an audio version of this blog, with music.

Listen to records by Björk, Baaba Maal, Talking Heads, Ani DiFranco, Ry Cooder, or  K.D. Lang,  and you’ll hear the trumpet of Jon Hassell.  It’s not always that obvious and often doesn’t even sound like a trumpet, but Jon Hassell has been quietly impacting music since he began working with minimalist icons Lamonte Young and

Terry Riley in the 1960s.  The Memphis-born trumpeter played on the 1968 recording of Riley’s seminal minimalist masterpiece, In C.

But it’s not as a sideman that Hassell has reshaped the music horizon. His 1980’s albums like Fourth World Volume One, Possible Musics, recorded in collaboration with Brian Eno, sent musicians like Peter Gabriel and film composer Mark Isham, off into ethno exotica territories, mixing technology and global music, improvisation and digital composition. 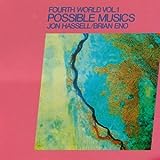 Hassell had many names for his sound, among them, Fourth World Music.

Jon Hassell: Let’s say there was a computer profile of an average man in the world.  Put all the physiognomy all the skin color all the everything together and what would you come out with.  You’d come out with a citizen of the world.  And what I wanted to do was a make a music that had that kind of universal appeal.

Steve Roach: With Jon Hassell he’s absolutely the musicians musician.  The innovations he’s brought through have filtered through a lot of people’s work.

Composer Jeff Rona has played with Hassell and now works in films, including projects with Lisa Gerrard.

Jeff Rona: He’s beyond the original guy.  Everyone else who is original still got it from Jon as far I’m concerned.

But Brian Eno admits, he’s not made the transition to popular icon.

Brian Eno: I’m sort of an evangelist for his music.  I really think it’s important music, and beautiful music too.  And I always wish that people would listen to it more.

His band on the album is a mix of old and new.  Bassist Peter Freeman, and sampler artist Dino J.A. Deane have been with him for years.  New comers include the between worlds violinist, Kheir Eddine M’Kachiche, who’s solos seem to reach for the sky while Hassell trawls the calm at the center.  Even more than Hassell’s previous albums, Last Night exists in a netherworld of swampy atmosphere’s and mysterious touches as music is resampled, looped and processed, creating odd rustlings, subtle rattles and subliminal pulses.  It’s the music of unsettled dreams and foreign terrain.

Jon Hassell is currently making his first North American tour in 20 years.  Tour dates include New York, Philadelphia and Los Angeles.  This has been an echo location, soundings for new music.  Echo Locations are run Wednesday mornings about 9:30 AM on WXPN, 88.5, Philadelphia.