Bill Bruford is an icon of Progressive Rock drumming. He came to renown as an original member of Yes, recording several albums with them before moving on to King Crimson. Over the years he’s spent more and more time with his cerebral jazz band Earthworks. But now he says he’s packing in live performances, concentrating on studio projects.

In the 1980s, Bill Bruford was juggling the rhythms of paradox, playing experimental music with the New Percussionists of Amsterdam and pop music with the Yes reunion law firm,  Anderson, Bruford, Wakeman and Howe. One foot kept the beat of rock, while the other triggered the sounds of electronics. But in the last several years, Bruford has reinvented himself as an acoustic jazz drummer.

Back in 1987, Bruford said: I can see absolutely what kind of man any drummer is, just put him on a drum set for 30 seconds and I can tell you immediately his strength, weaknesses, his bravery, whether he’s a coward, strong-backed, weak-willed, flaccid, limp, pathetic, strong or whatever. You can tell right away because you can tell the choices he’s making.

Bill Bruford has always had a sardonic side. He was both erudite and sarcastic, tempering his enthusiasm with equal doses of criticism and British self-deprecation. He spoke with mixed emotions about Yes, the group that helped create Progressive Rock.

Bill Bruford: At the time it was a good opportunity to indicate that pop didn’t have to be about playing instruments simply. You could also play it in other ways too. You didn’t have to be Jan and Dean. There were other ways of using drum sets and things. So I think in that sense it was very good. And I’m must admit that on the big hit, Close to the Edge, I think something happened on that album which was above the music. It was very good. But naive stuff and I can’t say I look back. 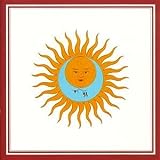 I first saw Bruford and Yes at the Orpheum Theater in Boston in 1972. At the time, I thought that Krimson was the pinnacle of Progressive Rock innovation and Yes was this pleasant, but innocuous pop group. I walked out blown away by Yes’ epic compositions and tightly controlled virtuosity.

“I remember that gig,” recalled Bruford. “Yes considered King Crimson hipper at the time, and after all King Crimson had a platinum album by this stage. I thought the sound of the group was much filthier, much more grown up, much more X-rated, you know. And I always wanted to be in King Crimson. And it was after that Orpheum gig that Robert [Fripp] suggested I join King Crimson, I think. To which I immediately said. Yes,” because then I could play that mean stuff, you know, that instrumental based stuff which sounded hipper to me.”

He played in three major incarnations of King Crimson, the last with the “double-trio” edition in 1997.

Back in 1989, sitting in the stretch limousine outside of the ABW&H concert in New Jersey, we asked Bruford whether he returned to Yes for the money.

Bill Bruford: It’s funny how you get paid in inverse proportion to the amount of work you do often. Often the amount of fun you have, yeah. You work for months on a project. Your back’s aching. You’ve changed the nature of the instrument. Everything is fabulous, and you get paid nothing. Conversely you sit around on some guy’s album date while he’s busy drinking himself to death or snorting cocaine or something and getting paid a fortune for doing nothing.

At heart, Bill Bruford’s always been a jazz drummer, nurturing himself on the grooves of Max Roach, Elvin Jones and Art Blakey. After King Crimson disbanded in the mid 1980s, he toured in an acoustic duet with former Yes and Moody Blues keyboardist Patrick Moraz. When Bruford decided to tackled Max Roach’s classic solo, “The Drum Also Waltzs,” he was making an important statement for himself.

BB: Yeah, a psychological leap, certainly. I think really what I’m saying is I want to part of the great tradition of jazz. And I’d met Max around that time and was very impressed by him and his dignity as an older player, and I think some of the older American jazz drummers are a credit. Art Blakey, Elvin and so forth are a credit to how you can be as an older musician. And It’s no doubt I’m in a sort of transitional phase here…and I think I can do more with looser music.

Curiously, an edition of Yes, sans Jon Anderson is touring.  King Crimson still rumbles around in one form or another, UK has just reformed as UKZ sans everybody but Eddie Jobson.   But as Bill Bruford approaches his 60th birthday on May 17, he’s decided to retire from live performances. Somehow, I suspect he’ll be back on stage, and shortly.  Bill Bruford: The Autobiography will be released in March.  Two CD anthologies of his music, The Winterfold Collection 1978-1986 and The Summerfold Collection 1987-2008 have just been released.

Portions of this blog originally appeared in Totally Wired, Electronic Musician and Echoes. Some of the interview materiel was gathered by Kimberly Haas.