For a guy who supposedly retired 4 years ago, Harold Budd is sure putting out a lot of records. He’s just offered up a new slice of gauzy atmosphere, hazy keyboards and unguitar-like electric guitar with Clive Wright. It’s called A Song for Lost Blossoms . 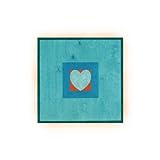 This works out to be the Robert Fripp and Harold Budd collaboration that I don’t believe ever happened. Wright is very much in the Fripp school of guitar playing using loops, delays, an e-bow and lots of volume pedal swells. You can hear that on “Forever Hold My Breath” with the guitarist playing over some slowly undulating keyboard waves, laying down those sinewy glissando leads. It’s one of two live performances on the disc and you can see the video of it on YouTube. There’s no sign of Budd in the video, just Wright spotlighted alone on the stage.

Lost Blossoms is an album that stretches out over time, and in the case of “Pensive Aphrodite” that stretch goes 32 minutes. It sounds like several vignettes strung together and it does sound rudderless at times. But the rest of the album is more concise with tracks like “At This Moment,” attaining a quiet heroism through swirling string pads and Fender Rhodes modulations that Wright uses like electric towers to drape his elongated solos.

There’s another video up there as well with an album track over desert scenery that I assume is shot near Wright’s home in Joshua Tree.

You should know Harold Budd, the avatar of ambient chamber music.  Clive Wright is a lesser known, journeyman musician.  He played with the band Cock Robin in the 1980s, whose debut was produced by Steve Hillage.  (Hear Steve Hillage audio profile). He’s worked in sundry bands like Broken Edge and with R&B artists like Montel Jordan. Now he works as a session musician, cuts commercial and video soundtracks and also contributes to the newly reformed Cock Robin.  None of that prepares you for the liquid mercury guitar sound he drizzles slowly across Lost Blossoms.

You can tell these were built out of free-form jam sessions, perhaps a mood or a key agreed upon and then a meandering walk through a fog shrouded landscape. Harold Budd is one of the few musicians who can get away with that and not have it dismissed as aimless twaddle.  Like many of Budd’s albums, this one insinuates itself over time, rising up out of the background noise to sculpt a personal interior world.  A Song of Lost Blossoms, which takes its title from a poem by Cock Robin singer Anna LaCazio that’s recited on the title piece, is like the lost soundtrack for a Sergio Leone western, full of brooding atmospheres and ominous portent and occasional acts of triumph.